Oil seal is the customary name for general seals, which is simply the seal of lubricating oil. It is a mechanical component used to seal grease (oil is the most common liquid substance in the transmission system, and is also generally referred to as the general liquid substance). It isolates the parts that need to be lubricated in the transmission parts from the output parts so that the lubrication Oil leakage. The seals used for static seals and dynamic seals (generally reciprocating motion) are called oil seals.

The representative form of the oil seal is the TC oil seal, which is a double-lip oil seal with a self-tightening spring that is completely covered by rubber. Generally speaking, the oil seal often refers to this TC skeleton oil seal.

The sealing function, characteristics, structure type, working state, and sealing mechanism of the oil seal, can be divided into various forms and different names, but it is customary to call the lip seal ring of the rotating shaft oil seal, static seal, and dynamic seal (generally reciprocating motion). ) with a seal called a seal [2]. 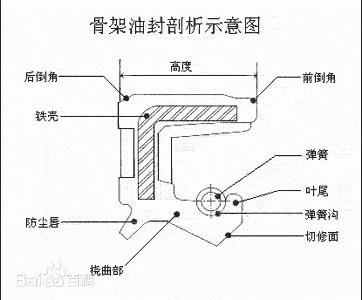 It has a good heat resistance and wear resistance, and is resistant to various lubricating oils, greases, oil and gas mixtures, etc., and is suitable for temperatures ranging from -30 to 120 degrees Celsius, but it cannot be used in phosphate ester hydraulic oils and gear oils containing extreme pressure additives. It is stable in gasoline and low aniline point mineral oil.

It has outstanding chemical stability, thermal stability, friction reduction, and self-lubrication, and its cracking temperature is above 400. Therefore, it can work normally in the temperature range of -200~300 degrees Celsius. In addition to free fluorine and alkali metals, it has excellent corrosion resistance to chemicals, solvents, hydroxide compounds, and acids.

Nitrile rubber and fluoro rubber materials are widely used oil seals. The former has low cost, but the temperature resistance and sealing performance are significantly improved, but the cost is high, and it still has some bad commonalities of ordinary rubber materials, such as poor wear resistance. , short service life, particularly sensitive to the eccentric response of the shaft, etc., leakage is still relatively common. PTFE oil seal is a product with high technical content, and it is the direction of oil seal development in the future.

Generally used for high and low-speed rotating shafts and reciprocating motion to seal mineral oil and water and other media.

Ordinary oil seals are used in the case of less dust and impurities. When the medium pressure is less than 0.05MPa, the maximum linear speed is 15m/s, and the reciprocating speed is less than 0.1m/s [3].

In addition to the use characteristics of the S-type oil seal described above, it can also be dust-proof.

Ordinary oil seal with dust lip can prevent dust. When the medium pressure is less than 0.05MPa, the linear speed is less than or equal to 15m/s.

Ordinary oil seals are used when there is less dust and impurities, and the medium pressure is less than 0.05MPa. When the rotational axis speed is less than or equal to 15m/s.

Ordinary oil seal with dust lip can be dustproof, and the medium pressure is less than 0.05MPa. Speed ≤ 15m/s.

The outer skeleton oil seal is assembled from the inner and outer skeleton and has the characteristics of high installation accuracy, fast heat dissipation, and heavy load.

There are oblique ribs with an angle in the air measurement of the lip, and the principle of fluid mechanics is used to generate a one-way pumping effect with a backflow effect.

It is related to the rotation direction of the shaft. Due to the backflow effect, the radial force is smaller than that of the ordinary oil seal, which reduces the wear and heat generation, and improves the service life.

The lip is short, the waist is short and thick, and it has the function of pressure resistance, and the working pressure is less than or equal to 3MPa.

Previous: Rapid replacement of oil seals for excavators
Next:  None
Product Category
contanct us
REQUEST A QUOTE